Following the example of NPR’s book concierge, Haven Writing Retreat host, Laura Munson, takes the reins this week as our Western Book Concierge. Her list can be a gift guide for your favorite bibliophile or serve as your own literary itinerary. If you want to treat yourself or a loved one to a one-of-a-kind experience this holiday season, consider booking a spot on a Haven Retreat. 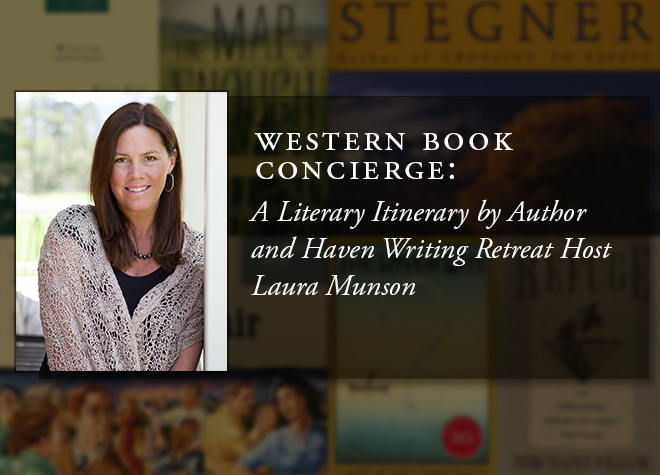 Montana has been my muse for over two decades. I hail from large cities, but have made my home in the small mountain town of Whitefish where I write, raise children and learn from the lessons Montana daily serves up on a silver platter. My lessons have been spun from endless skies of wonder and possibility, pristine and forgiving waters, the patience of mountains and steady-but-dauntless horses. Montana has been the best teacher I could ask for. I can say the same for its people. And I can say the same for its writers. Every time I return to The Flathead Valley where I live, I look into its wide-open spaces with more white-tailed deer than people and am grateful to be home. I could lead my Haven Writing Retreats anywhere, but I choose Montana because I know that it will teach its lessons to all who come. It has to. It’s just what Montana knows how to do—marry the wilderness of the West to the wilderness of the human heart. So in keeping with this sacred place, I am honored to share some of my favorite Western books with you, delivered by the voices of the west and illustrated by the environs of The Ranch at Rock Creek. Read them and dream your inner wilderness alive!

The Adventurer: Angle of Repose by Wallace Stegner

This book cut straight to my core when I read it, especially as a young woman who migrated from the East to the West, uprooting myself from my family of origin and my social comforts. It brings you into the core of the pioneer spirit, chronicling a young bride from gentile East Coast society as she struggles to abide by her trail-blazing engineer husband. As they navigate the Wild West, she wonders if she’s married to the bridge-building, coal-mining boom, more than the man she calls husband. I think of these characters whenever I’m feeling like a fish out of water. If you love to imagine yourself with that kind of courage and vision, and the conflicts that might ensue when you follow love “off a cliff,” you will feast on this book. Further Reading: Both Ways Is The Only Way I Want It by Maile Meloy

The Naturalist: Winter by Rick Bass

When I chose to move to Montana, a friend gave me this book about a Texas environmentalist who was seeking his deepest wilderness in one of the last pristine corners of the lower 48—the Yaak Valley in Northwest Montana. I read this book voraciously, looking for guidance, and yes, permission to leave my own urban life and fall in love with the flora and fauna of “the last best place.” In its pages I found hilarity (often in self-deprecation), breathless accounts of remote wilderness living, and a kindred spirit. Rick Bass is a Montana treasure whose inherent curiosity and vulnerability make him one of those writers who helps you feel at home, even in the land of grizzly bears, renegades and dreamers. Further Reading: The Wolverine Way by Doug Chadwick

The Historian: Dancing at Rascal Fair by Ivan Doig

You can tell that Ivan Doig loves his ruddy young immigrant characters as much as he loves Montana itself. He takes us into the folly, heartbreak and moxie of what it was to be young men with wanderlust in the homesteading days of the late 1800s. I could not get enough of this book and wish that he had written an octet, rather than a trilogy. I drive over to Doig territory (Choteau) every year in spring to watch the snow goose migration and think of his young sheepherding dreamers as if they were ancestors of mine and stories passed down in my own family, rather than fictional characters I met and fell in love with on the page. Further Reading: Pretty-shield, Medicine Woman of the Crows by Frank Bird Linderman

So many of us who have settled in the West began as wanderers, and Terry Tempest Williams comes from a legacy of wanderers—in her case, the Mormon trek to Utah. Hers, however, is not a wandering spirit of geographical re-positioning, but a wandering of the soul as she navigates the brutal waters of her mother’s death to cancer and the effects of the bird population of the rising levels of the Great Salt Lake. This is a beautiful book for anyone who wants/needs to examine personal loss, and find healing through the power of nature and contemplation. Further Reading: Richard Hugo’s poetry, especially Degrees of Gray in Philipsburg

The Spiritual Traveler: The River Why by David James Duncan

The River Why has a cult following that crosses all demographics and especially appeals to the angler and spiritual seeker. Think Catcher in the Rye on a wild river in the West, mixed with a deep dose of mystical thinking. Most of all, The River Why is a love story—the love of a man for the wilderness, and for the great unknown. This is the ultimate coming-of-age story, told by a master of the English language, a deeply thinking mind, a deeply feeling heart, and a wickedly quick wit that is fearless when it comes to asking the big questions. I give this book to every graduating high school senior I know, and return to it annually for my own personal growth. Further Reading: Brothers K by David James Duncan (simply one of my favorite books EVER) and Conjugations of the Verb: To Be by Glen Chamberlain

The Modern Homesteader: The Map of Enough by Molly Caro May

Molly Caro May is also a transplant to Montana and a woman learning its lessons, so I deeply relate with her as a writer and fellow re-inventor. As a child, she moved from country to country, just like her father and grandfather. She has leaned heavily on this nomadic identity. But on the verge of turning thirty years old, everything changed. She and her fiancé moved to 107 acres in Montana—land her family owned but rarely visited, with the idea of staying for only a year. So begins her journey surrounded by tall grass, deep woods, the presence of predators, building from scratch and living in a traditional Mongolian yurt, and asking herself what story she has told herself about who she is, what does home mean, and ultimately “what is (or am I) enough?” Further Reading: Homestead by Annick Smith and Where Rivers Change Direction by Mark Spragg

The Outdoor Sportsman/woman: The Works of Jim Harrison

Jim Harrison is a large part of why I write books. I love everything he’s ever written and have waited with baited breath for his next book, book after book, since I was 18. You’ve probably seen the movie Legends of the Fall, a Hollywood version of a lesser known Harrison novella by the same name, which brings us back to a time in the great West when the Hero’s Journey meant traveling to far-away places to find meaning, duty, self, home. This is a story that hits all of the universal themes in powerful writing: human vs. nature, human vs. human, and human vs. him(her)self. Harrison can’t write a book without bringing in his great loves: bird hunting, fly-fishing, and cooking and you’ll find all of the above in most of his work. Most of his characters are great outdoor sports-people, and know their way around an excellent bottle of wine and a delicious meal. To that end, I adore Just Before Dark. It’s a collection of essays divided into sections like, “Food,” “Travel & Sport” and “Literary Matters” and it’s saturated with wisdom, humor and insight into every subject from, bird hunting with a French Count, to bar pool, to Ernest Hemingway, to Zen writings. For a powerful poetry punch, read his Theory and Practice of Rivers.

I hope that you will enjoy these exquisite books as they weave you into what it is to live in the open spaces of the West and the human heart. Yours, Laura Munson.

The Staff at Rock Creek: 2019 Employees of the Year

If you've been to The Ranch, seen our TripAdvisor reviews or even wandered onto our Instagram profile, you'll know, our staff is what gives us our Forbes Travel Guide Five-Star ...

We love having a hand in life-changing moments - whether it's riding a horse for the first time or saying, "I do" surrounded by falling aspen leaves. This past holiday ...

The Ranch Wins 2nd Forbes Travel-Guide Five-Star Honor The skies have been clear for stargazing lately, but the most exciting constellation we’re seeing today is from one of the world’s most trusted ...